Best Month to Elope in Colorado

If you live in Colorado, you already know that our weather is very unpredictable. But couples who ask me about the best month to elope in Colorado are always surprised that the weather and seasons are so erratic here.

I once had a couple from Louisiana ask if they could do wedding photos on Trail Ridge Road in Rocky Mountain National Park in December. That road is closed from October through May, and is under 10+ feet of snow all winter. I’ve had couples ask if I can help them find a location with “spring wildflowers” in April – the second snowiest month of the year here. (If you do want wildflowers, July is your best bet!)

So if you’ve ever wondered what’s the best month to elope in Colorado, here’s a full breakdown for you!

Elope in Colorado in January or February 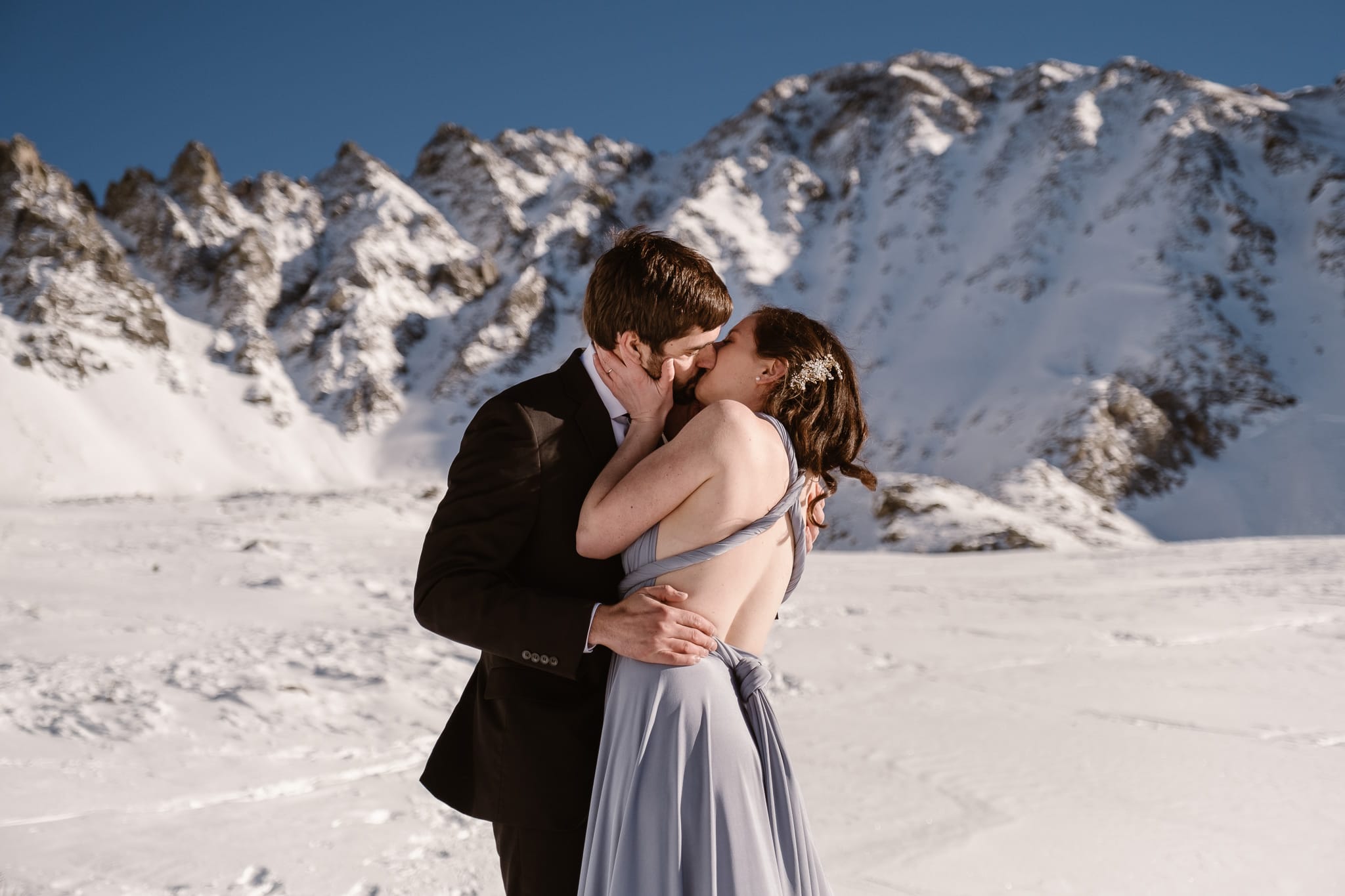 January and February are very much traditional winter months in Colorado … in the mountains. Down in the Denver/Boulder area, we have everything from 70 degrees and sunny to heavy blizzards. Daylight hours are short (7:30am-5pm ish), so if you want a sunrise elopement without getting up too early, winter is the time to go. Most hiking trails, including everything in Rocky Mountain National Park, is much more quiet this time of year too. If having a frozen alpine lake to yourselves sounds like a good time for you, eloping in winter is the way to go!

Christine and Jordan’s backcountry skiing elopement might just be the most Colorado thing I’ve ever photographed!

Elope in Colorado in March 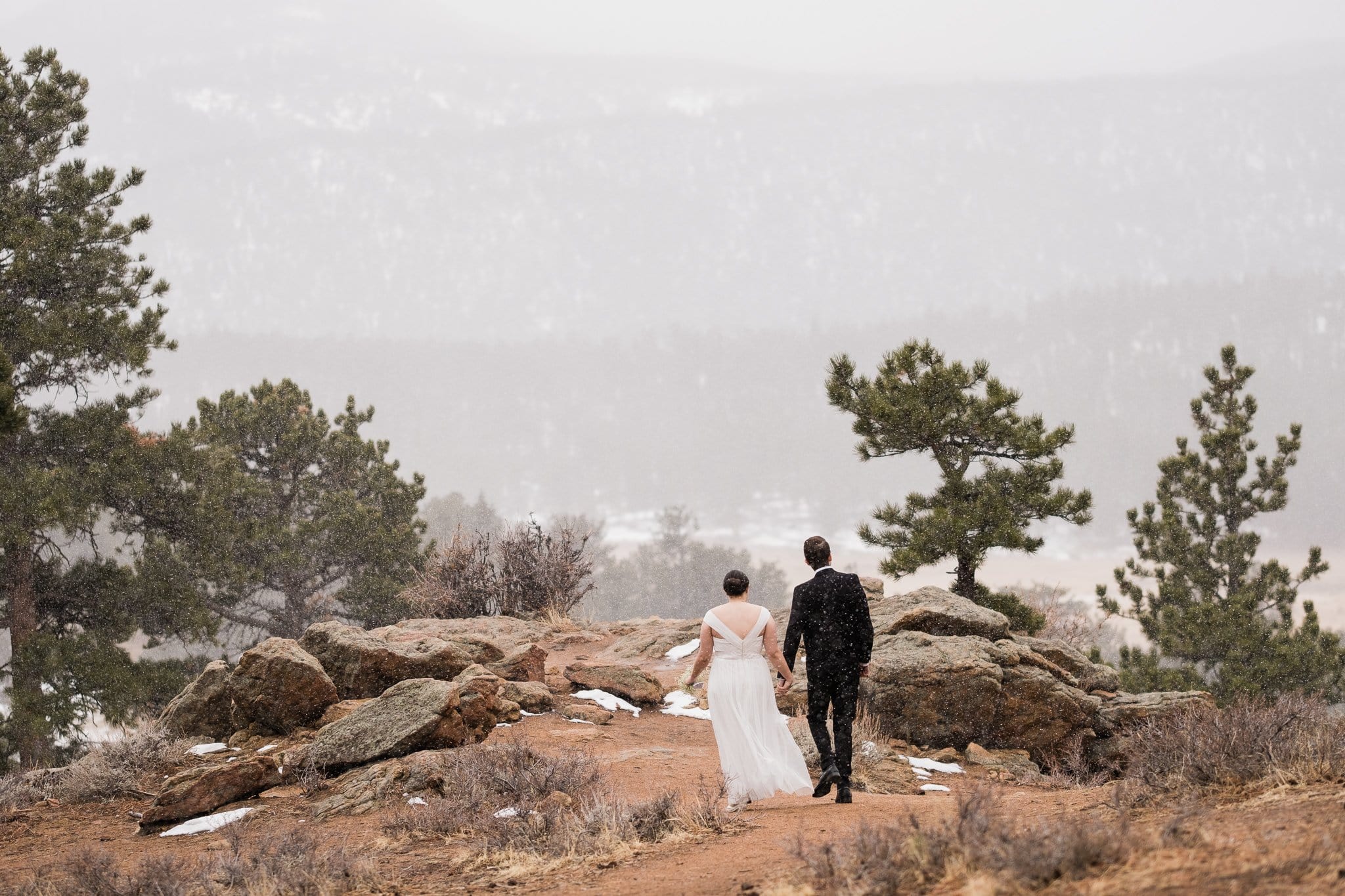 I’m listing March as separate from the other winter months because it’s the snowiest month in Colorado. We get a lot of blizzards this time of year, and this unfortunately can make elopements hard to plan. This year we had over 500 avalanches in March! Many roads through the mountains were shut down, and more than one avalanche went across roads and caught cars. The photographer groups on Facebook were full of posts from people who couldn’t get to shoots and weddings because of closed roads. If you really want to elope in Colorado in March, I highly recommend picking a location like Rocky Mountain National Park or Boulder / the foothills rather than going up into the mountains.

Elope in Colorado in April

April is spring across most of the United States, but Colorado is a bit extra. There are absolutely no guarantees for what weather you will get for an April elopement; it could dump a foot of fresh snow in 24 hours, or you could get a warm and sunny day. Anything at high altitude will still have snow, while the lower areas can be buddy and gray. On the bright side, it’s generally warmer than the other snowy months, so if you want to rock a wedding dress in the snow, April might be right for you.

Check out Alaina and Andrew’s April elopement in Crested Butte – we had every season in six hours. Caroline and Steve’s elopement at Sprague Lake in RMNP – we had to move up the ceremony to earlier in the day to avoid heavy rain in the afternoon.

Elope in Colorado in May 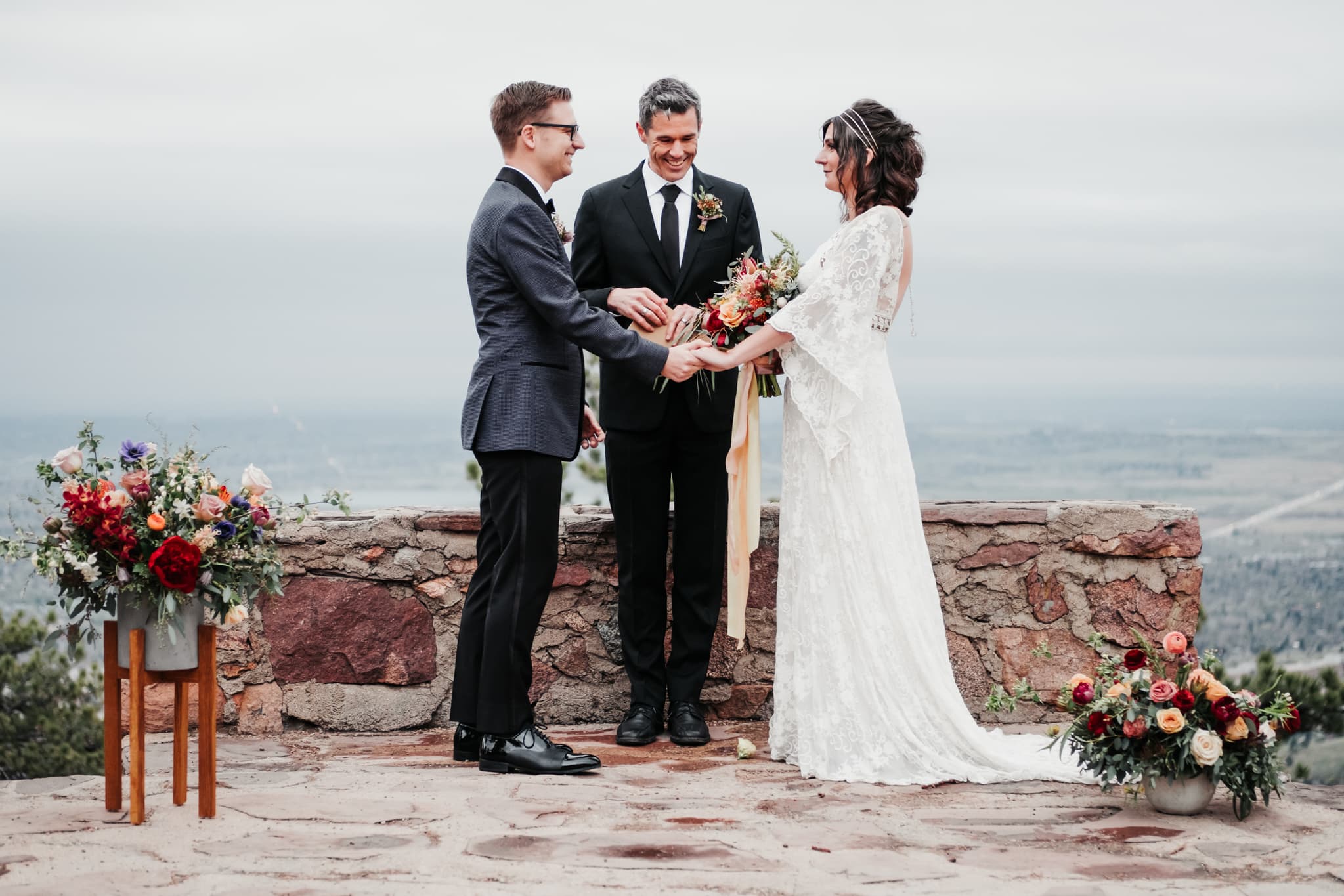 May means it’s finally spring in Colorado! The grass is slowly getting green again after months of rocking the brown/dead look, the trees are coming to life … and surprise snow storms are almost a weekly occurrence. Yep, we’re not done with the snow yet. At high altitudes, the snow is starting to melt, but there are still a couple of ski resorts open, and most mountain passes and high trailheads are closed. It’s a great month for Rocky Mountain National Park elopements, since the park is less busy than during school holidays, but still warmer than in the winter months.

Check out Shawna and Peter’s vow renewal that got snow on May 1st, Lindsay and Payden’s RMNP elopement in a blizzard on May 9, Alyssa and Matt’s elopement at Maroon Bells at the end of May, and Cassie and Chris’ engagement session over Memorial Day weekend that had a foot of fresh snow on the ground.

Elope in Colorado in June 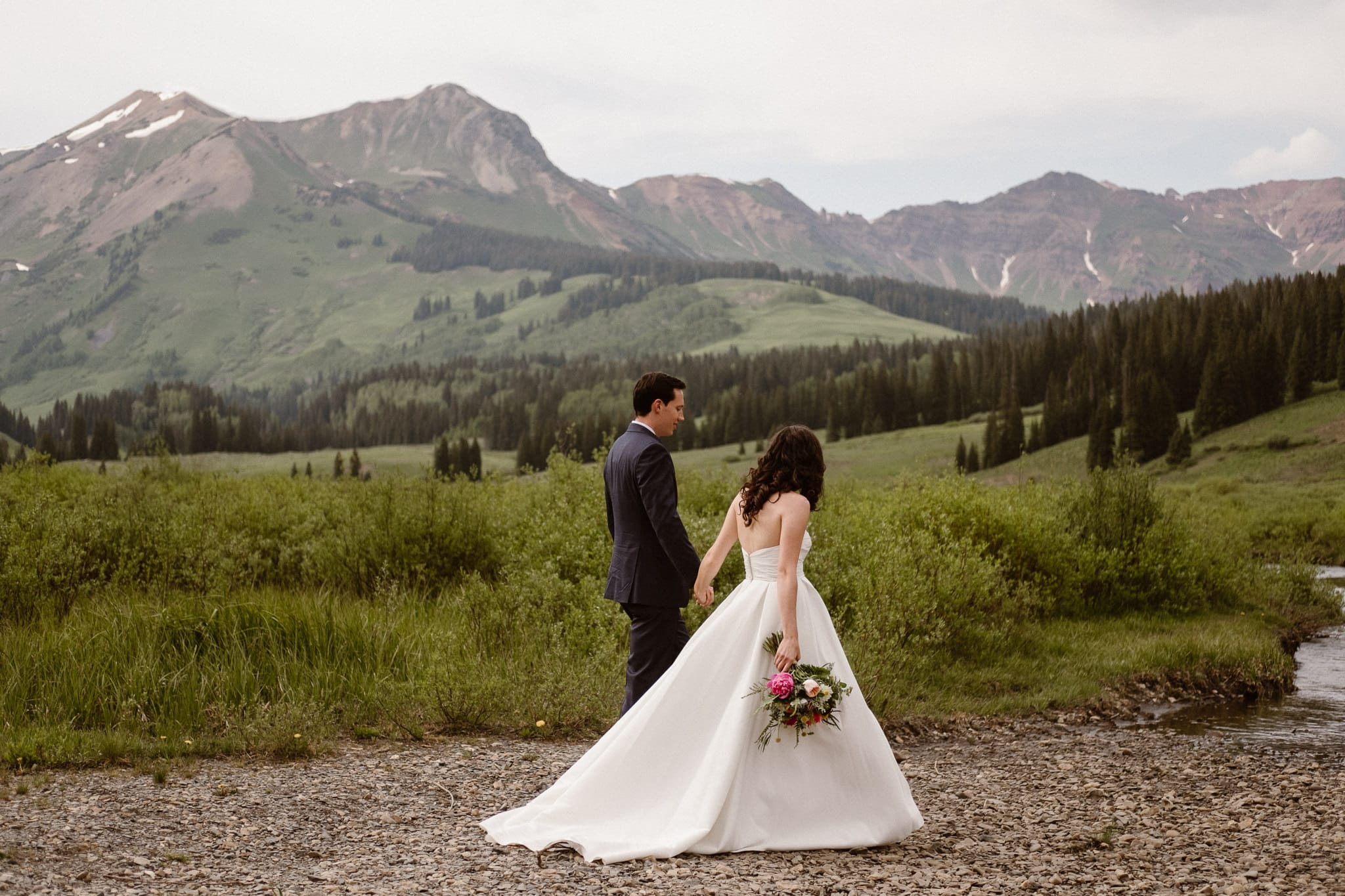 I can only speak for myself, but June is by far my busiest month as a Colorado elopement photographer. Everything is green, the weather is pleasant without being too hot … and there’s still snow at high altitudes. Many of the mountain pass roads open throughout June, so you have more locations to choose from than earlier in the year, but not everything is open yet. The end of June is also when wildflowers start peeking out. And rivers and waterfalls are at their fullest from all the snowmelt.

Check out Lauren and Charlie’s snowy RMNP elopement on June 7, Holly and Matt’s elopement in Crested Butte on June 15 at the very beginning of wildflower season, Mary and Nick’s hiking elopement on June 28 (2019) where we were postholing in snow, and Sae and Andrew’s June 30 (2018) mountain elopement at a lake that’s covered under snow for nine months of the year.

Elope in Colorado in July and August 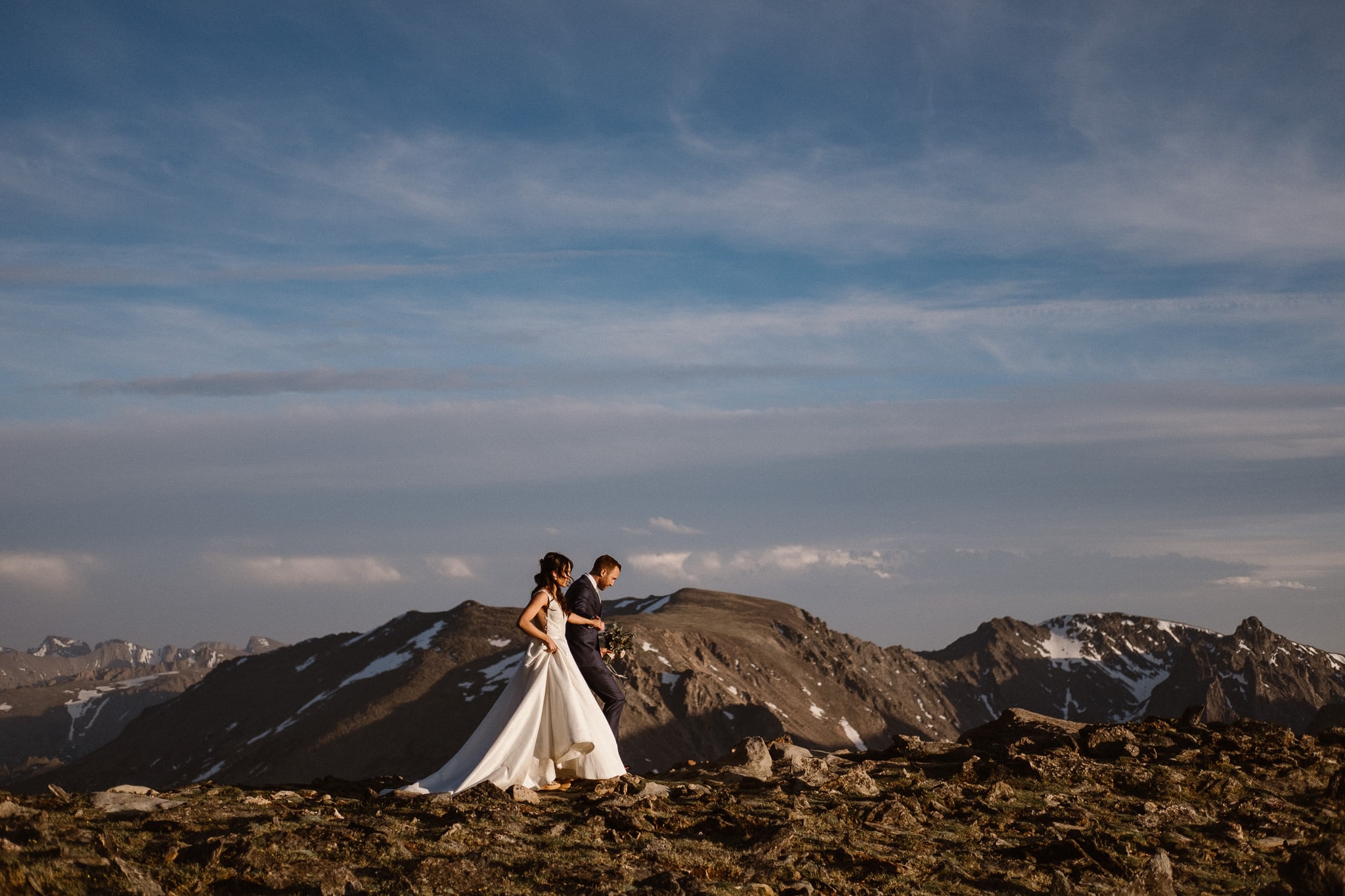 July and August are actually my favorite months to elope in Colorado! I think many couples avoid these months because they’re worried about being too hot, but at 10,000ft and higher it’s the perfect temperature. All the mountain passes are open by now, so you have way more locations to choose from. (Seriously, I have so many epic locations saved for couples who want to elope in July or August that aren’t accessible the rest of the year!) July is also the height of wildflower season, and perfect for escaping to a mountain town like Crested Butte or Telluride.

Check out Kelsey and Mark’s sunrise first look at Trail Ridge Road, and Kimberly and Kevin’s elopement at an alpine lake off a 4WD road – both locations are only accessible for a few months every year.

Elope in Colorado in September

September is one of the best months to elope in Colorado, as it seems like everyone wants fall colors for their photos. The weather in September is pleasantly warm all over Colorado. There’s not as much chance for afternoon rain storms as in the earlier summer months. All the mountain roads are still open, so you have plenty gorgeous locations to choose from.

The main negative of September elopements is that Colorado goes absolutely crazy on the weekends during fall colors. And it’s really, really hard to predict when the colors will be good. Last year I had elopements every weekend of September, and all of the couples wanted fall colors: only one of them got lucky. Some years the peak colors are the second week of September, some years it’s later. If you’re planning to elope in Colorado in September, I highly recommend that you don’t get too hung up on the fall colors, and that you pick a weekday.

Elope in Colorado in October 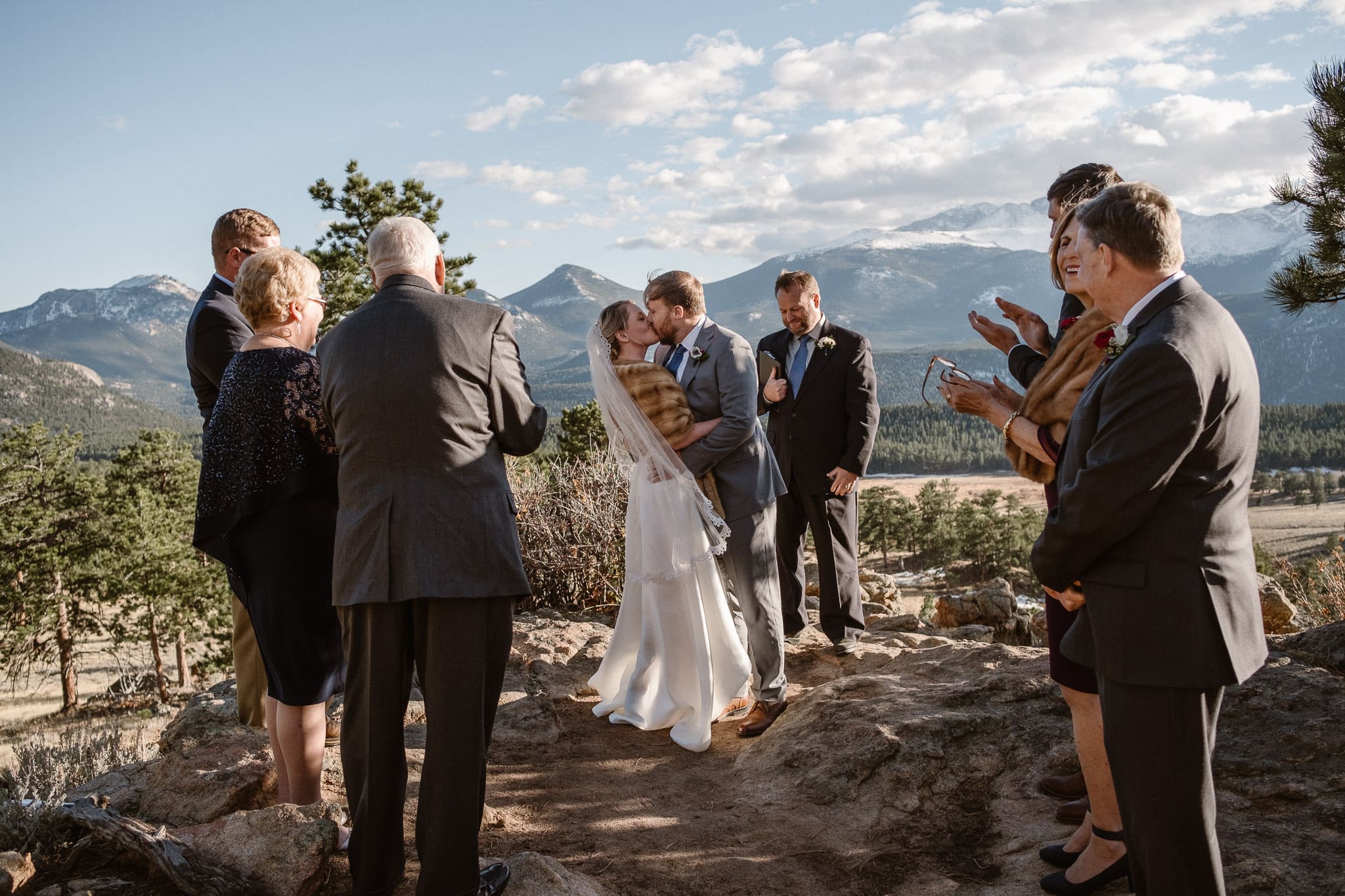 October is another interesting month here. There’s a high chance of snow, although it never sticks around for long at lower altitudes. By mid-October, you should think of it as a winter month, and rather be pleasantly surprised if you don’t get snow on your elopement day. Most of the smaller mountain pass roads close as soon as there’s snow, so you’re a bit more limited in choice of locations. But on the bright side, the mountains look amazing with a dusting of snow, and there are hardly any tourists around.

Alexandra and David’s session at Brainard Lake on October 1 had the perfect sunny fall weather, while Alison and Trevor’s elopement in Steamboat Springs on October 10 got a foot of fresh snow.

Elope in Colorado in November and December 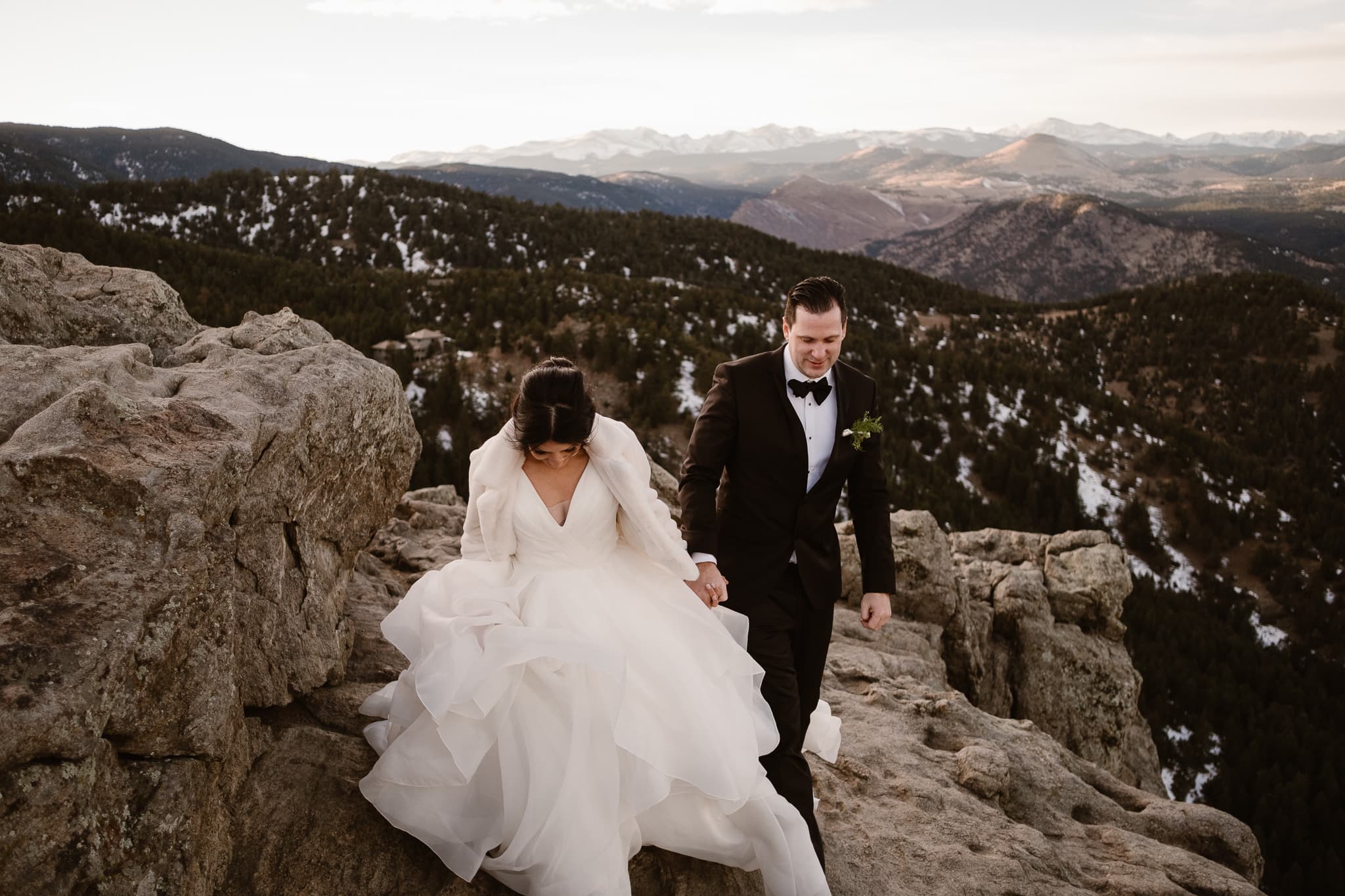 Avoid the weeks of Thanksgiving and Christmas if you’re looking for privacy, but otherwise these months are like any other winter months in Colorado. Snow is now sticking around at higher altitudes, while it’s melting as often as it falls in Boulder/Denver. If you want guaranteed winter and snow for your elopement, I don’t recommend November and December since there’s a good chance the landscapes will look brown and dead instead. BUT if you want to go for a longer hike without needing snowshoes, it’s perfect since the snow is not deep yet.

Karen and Sebastian’s elopement in Boulder on December 23 shows how warm winter can be in the foothills. Katie and Mike’s elopement at Horsetooth Reservoir on November 1st was freezing cold – only 4 degrees at sunrise.

And there you have it! Hopefully this is enough to help you decide what’s the best month to elope in Colorado, but it’s so individual for every couple and what you’re looking for. If you want the most locations to choose from, wildflowers in the mountains, and zero chance of snow, go with July or August! If winter wonderland is more your style, January and February are perfect.

But whichever month you choose, it’ll be epic. It’s Colorado. 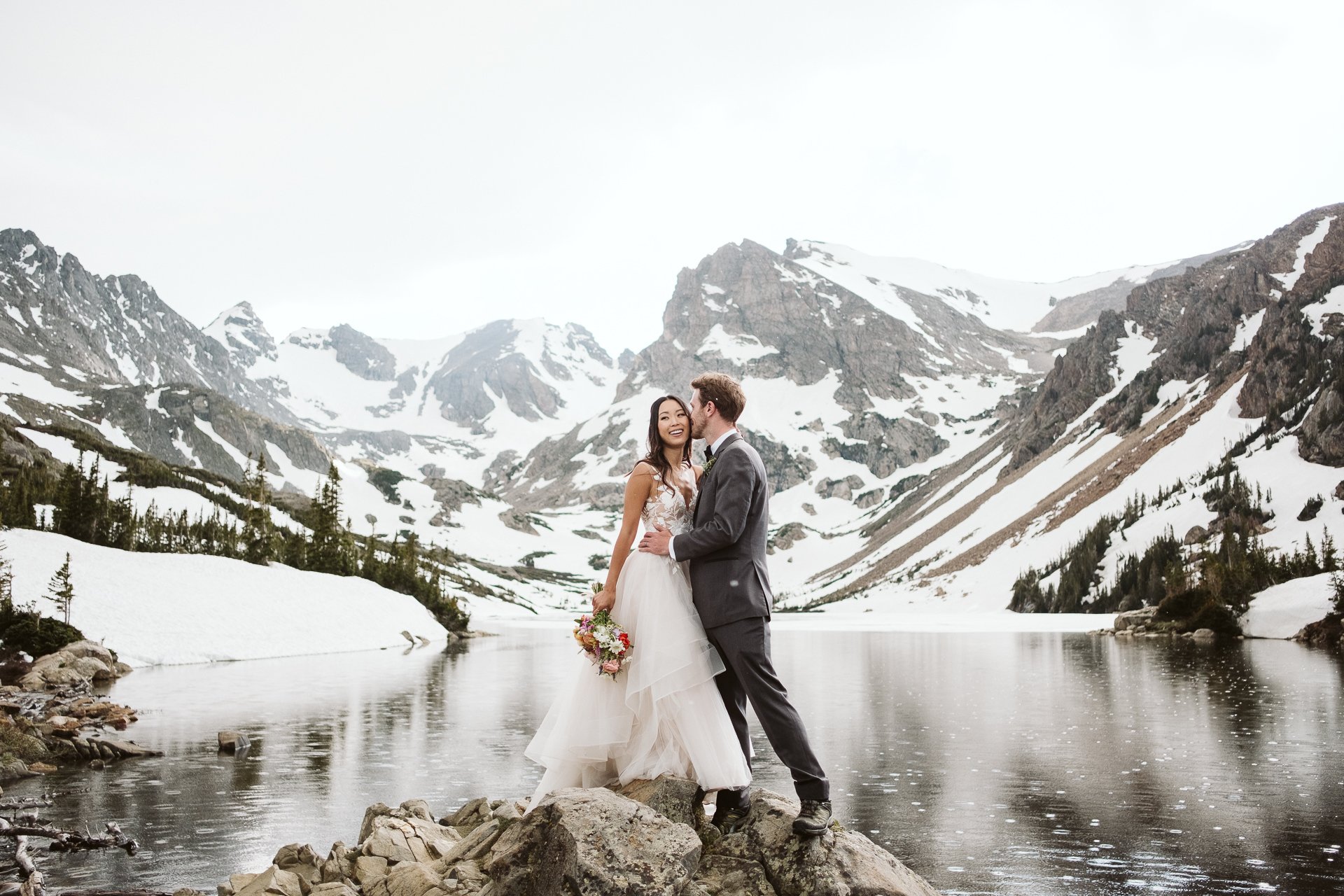 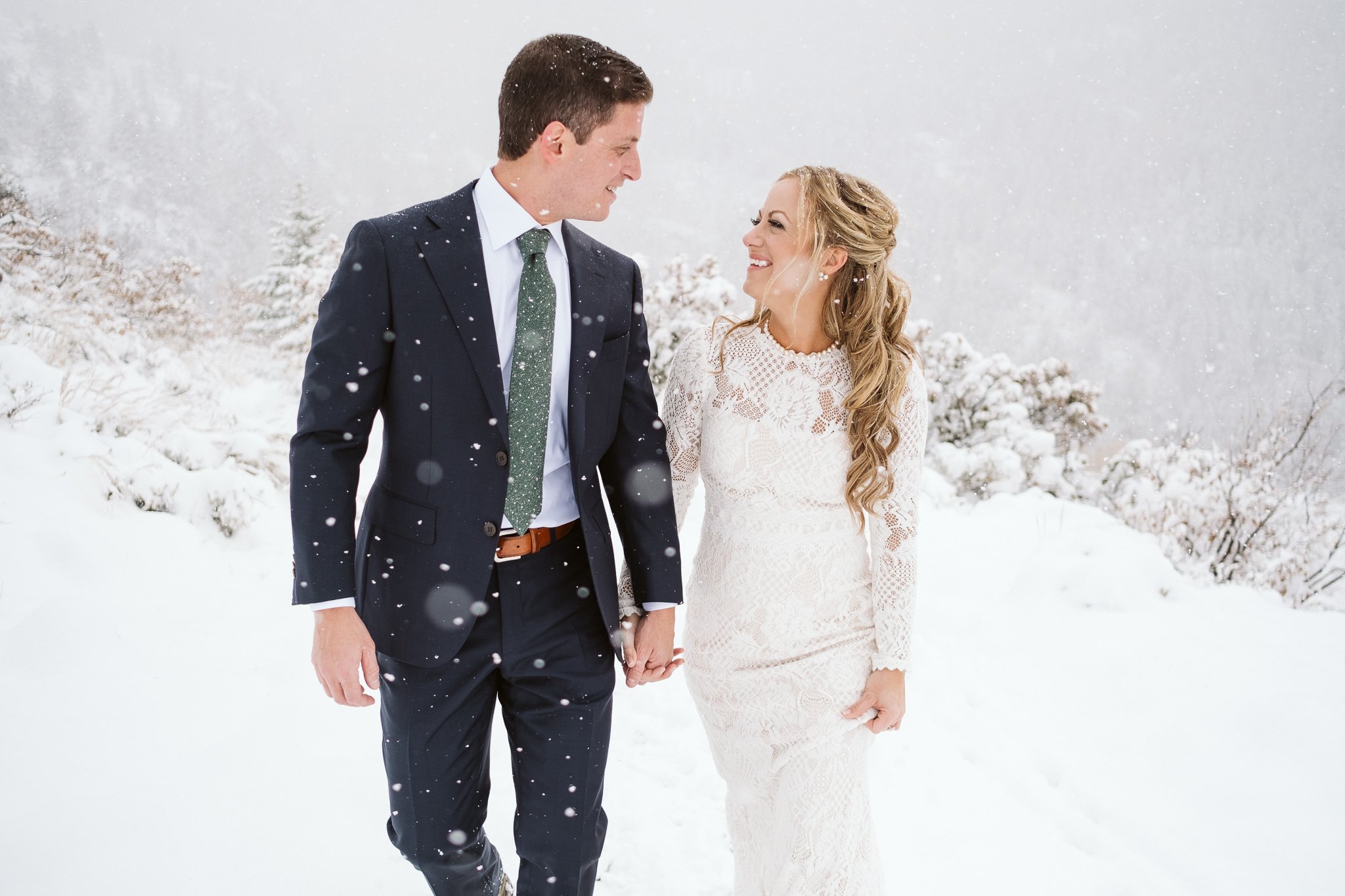 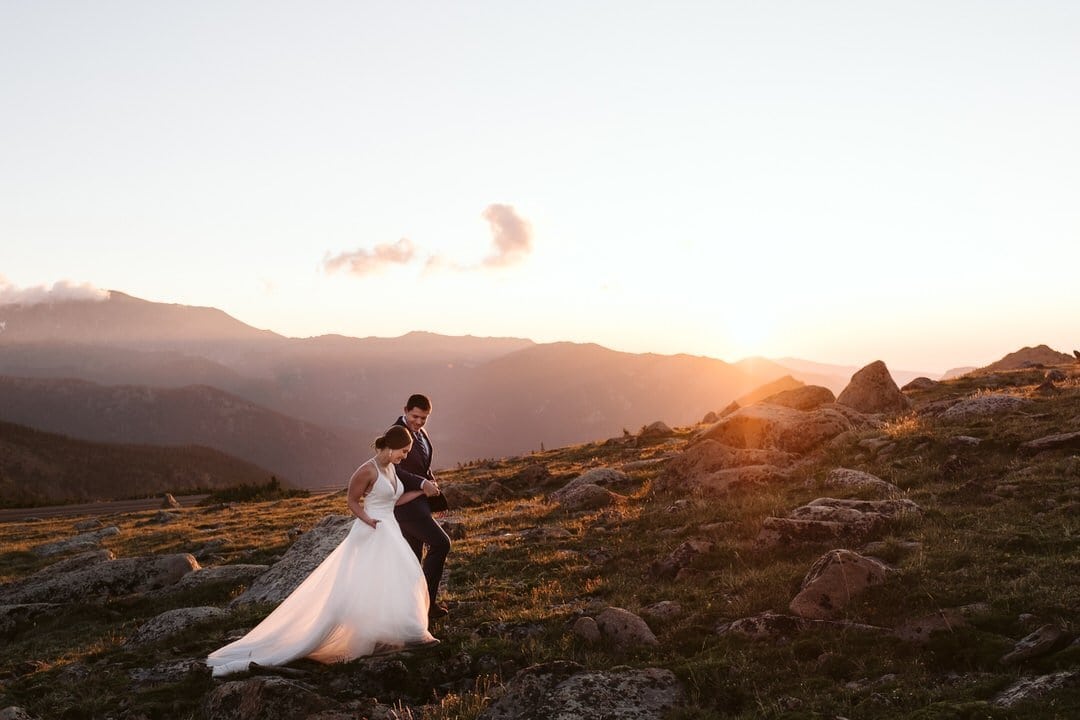